According to Riot Games CEO Nicolo Laurent, VALORANT will have the following:[1]

Ten players are split into two teams, one attacking and one defending. Attackers must plant a bomb called the "spike" at one of two or three bomb sites, labelled A, B, or C on the map, and then defend it until it detonates. Defenders must prevent the spike from being planted within the time limit of the round, or diffuse the spike if it has already been planted. Rounds can also be won by eliminating the opposing team; however, if the spike has been planted, this no longer becomes an option for the defenders. After completing 12 rounds, the teams switch sides. The match is complete when one team wins 13 rounds.

An overview of the agent Breach.

Playable characters are called agents. There can only be 1 of each agent per team. Agents are chosen at the beginning of the match and cannot be changed after that. To ensure that no agent has an advantage in a pure gunfight, all agents have the same base stats, including hitbox size.[2]

Currently, ten agents are available to choose from, though 12 are planned for launch.[3] Five of them—Brimstone, Jett, Phoenix, Sage, and Sova—are free. Players can recruit two more agents by earning EXP through games. After that, if a player wishes to recruit another agent, the player must activate that agent's "contract" and work towards recruitment via EXP.

Unlike weapons, abilities also affect teammates and can potentially kill them.

Agents are categorized into four classes: controllers, duelists, initiators, and sentinels. Controllers are experts in slicing up dangerous territory to set their team up for success. Duelist are self-sufficient fraggers who their team expects, through abilities and skills, to get high frags and seek out engagement first. Initiators challenge angles by setting up their team to enter contested ground and push defenders away. Sentinels are defensive experts who can lock down areas and watch flanks, both on attacker and defender rounds.

The buy menu, where weapons, armor, and abilities can be purchased.

Players can carry a primary weapon, a side arm, and a melee weapon; the melee weapon is the tactical knife. Switching to the side arm or tactical knife allows players to move faster, with the knife being the fastest. Primary weapons are classified as SMGs, shotguns, rifles, snipers, or heavies.

Players start out with the tactical knife and a free Classic pistol as their side arm. Other side arms can be purchased at the start of the round. Primary weapons must be purchased, though it is impossible to buy one during the first round of the match and of the switch because players are not given enough creds. Players can purchase guns for their teammates, if their teammate requests it.

Players can also drop and pick up guns. Guns are automatically dropped if the player dies. If players survive a round, their guns automatically have their ammunition restored next round. If they die, they would have to repurchase their weapons again.

The tactical knife deals 50 damage for the primary attack and 75 for the alternate. The damage is doubled when backstabbing or against destructible objects.

Armor is purchased at the start of the round. There are two types: light shields that absorb 25 damage and heavy shields that absorbs 50 damage. Instead of blocking all incoming damage until it breaks, armor only absorbs 2/3rds of the damage and the rest is removed from the player's health. If a player survives a round without breaking the armor, the armor is transferred over next round, but it will not repaired. Armor does not protect health from fall damage. 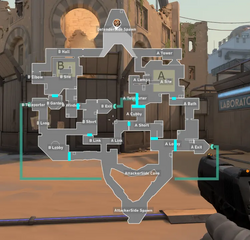 An overview of the map Bind.

Currently, there are three maps, though four are planned for launch.[3]

Sections of each map are labelled for callouts, and can be pinged. Attacker Side Spawn, Defender Side Spawn, A Site, and B Site are found in every map. Maps can also have a C Site. Areas around the Sites are also labelled A, B, or C.

Riot Games announced VALORANT under the name "Project A" on October 15th, 2019 as part of the 10th anniversary of League of Legends.[4]